This Elegua beaded necklace was handmade by me using high-quality glass seed beads. Elegua is the opener of the doors. Wear the Elegua’s beads for protection as you walk down new paths.

Hangs 14 – 30 inches (depending on your selection). This Elegua beaded necklace was handmade by me using high-quality glass seed beads. Elegua is the opener of the doors. Wear the Elegua’s beads for protection as you walk down new paths.

Other lengths can be made to order. Send me a message to put in your request. These Elegua necklaces are composed in varying patterns of red and black beads; usually in groupings of three which one of his sacred numbers.

Elegua (also spelled Eleggua) is an Orisha, a deity of roads in the religions of Santeria, Umbanda, Quimbanda, Candomblé and in Palo Mayombe. He is syncretized with either Saint Michael, Saint Anthony of Padua, or the Holy Child of Atocha. Elegua is known as Èṣù-Ẹlẹ́gbára in the Yoruba religion and is closely associated with Eshu. Ẹlẹ́gbára means the “master of force” in the Yoruba language.

Eleguá is known in Cuba and Puerto Rico as the orisha and “owner” of caminos, or roads and paths. All ceremonies and rituals in Santeria must first have the approval of Eleguá before progressing. He is the messenger of Olofi. Within the “Regla de Ocha” of Cuba, he slightly differs from Echu, who in this case is seen as his brother, by having less dangerous and less aggressive characteristics. Eleguá moves silently; in contrast, Echu “breaks through”. Manifestations of Eleguá includes Akefun, Aleshujade, Arabobo, Awanjonu, Lalafán, Obasín, Oparicocha, and Osokere.

There is a story in Santeria in which Olodumare gives Eleguá the keys to the past, present, and future; for this reason, Eleguá is often depicted holding a set of keys. A figure of Eleguá may be placed in the house behind the entrance door.

Elekes are typically received as part of the initiatory Collares/Elekes Ceremony in Regla de Ocha.

These have been consecrated.

There are no reviews yet.

Be the first to review “Elegua Beads” Cancel reply 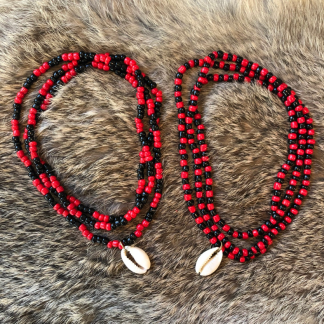